In The Fast Lane: Get updates on the latest from IMS 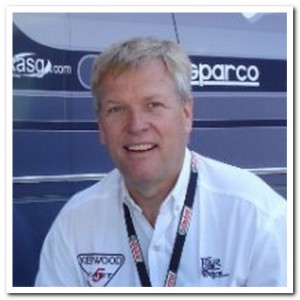 The founder and CEO of International motor Sports Inc. started riding and racing motorcycles at a very early age. He was not allowed to own a motorcycle, but deeply cared for and wanted a motorcycle. So, from his own grass cutting money, he purchased his first motorcycle, and kept it at a friend’s house. Eventually his parents warmed up to the idea of his motorcycle, and recognized his entrepreneurial spirit of obtaining his own motorcycle. So he was allowed to bring it home. Since it was a used motorcycle it often needed repair and improvements. Thus his mechanical aptitude was developed at a very early age. The town he grew up in was still underdeveloped. So off road trails were abundant, riding them as often as he could, between jobs.

He has been self-reliant and self-employed nearly all of his life since he was twelve years old. He did work while in high school and college for other companies to provide a steady income. Those other companies were major new car dealerships that sold domestic, German, and English cars. He then became better versed in mechanical aptitude, and vehicle coachwork through these opportunities. While in high school he pursued moto-cross racing, and enduros, and worked for Road Atlanta. His older sister and brother- in- law were the chief “Timing & Scoring” duo there at that facility, and introduced him to several others in management at Road Atlanta. Kevin participated in various aspects with the track, from helping to go “green,” to crowd control, working with drivers/crews in the paddock area, and technical inspection. On race weekends observing the 1st J-Wax Can-Am (Canadian / American challenge) and the development of the SCCA racing series, including the infamous “Trans-Am” (Trans-America) series, consisting of production based American sports car.

While in college, and still working part time for Road Atlanta, and new car dealerships he used a motorcycle for transportation. Recognizing the joys and personal experience of road racing through R.A. , and his own past history of MX and woods riding. He entered his street bike in numerous events, and really started receiving the rewards and success of the culmination of his dirt bike experiences, now combined into his road racing ability. Thus transpiring into hardware, and podiums, with regional, and National championships. While also in college he developed “motorcycle only” parking at West Georgia University he attended. Helping ease the pain of constricted parking lots, and increase the number of spaces, now to become available for cars to park in. While creating a byproduct of motorcycle awareness, and the attractiveness, and ease of riding a motorcycle to class. All motorcycle parking was located right next to all doorways of buildings. Why park in the ozone layer, when you can ride right up to class.

Once out of college, International Motor Sports Inc. was established in 1984. IMS thesis “We race what we sell” Which offered all aspects of mechanical aptitude on cars or motorcycles. From general repair, to race prep, for cars and bikes! A purveyor of foreign auto parts (which in those times was obscure) and motorcycle parts, combined together under one roof. Which consisted from modifying engine performance, consisting of intake and exhaust modifications, to fabrications, and suspension work for cars and bikes.

In the eighties, an exciting and new market was rising up; carphones. He found that very intriguing, private electronic communication that needed to be enhanced into the car, and present it as if it came from the factory. There was an explosion of work needed in this area. The new car dealers he was involved with before, turned to him, to provide their customers with that perfect O.E. integration, and seamless installation. Thus, other derivatives of IMS were created for electronic integration carphones.com bus installations.com and radar installations.com

In the early nineties as an outside vendor carphones.com worked closely with a local BMW dealership; Global Imports and BMW N.A. to improve “hands free” audio quality, which was the #1 complaint of all drivers, on their CSI scores. After several experiments, between product and equipment, and mixing and matching, the proper solution through R&D efforts was achieved. His company became responsible for BMW AG to change the location and the position of the hands free microphone in all new BMW vehicles from that point forward.

After that experience, Global Imports BMW recognized his motorcycle background, and his tenaciousness in any project. He was asked to direct and head up the BMW motorcycle division for their “Top 20” BMW new car dealer. BMW N.A. wanted to give back to BMW AG to help increase product awareness, viability, and their North American presence in the motorcycle market. His goal to provide continuity between the two communities, cars and motorcycles can co-exist together under one roof.

Brought the local Atlanta dealership from worst to first place in BMW motorcycles sales in just 11 short months. From total obscurity to a “presence” and a force to be recognized. While also introducing the BMW R 1100 RTP “police bike” to all of the municipalities from Washington D.C. to Hollywood Fla, to Louisiana. And being constantly ridiculed, “it’s not a Harley” it does not have floor boards or a baby shifter. At least the Ice was broken, and now more people are aware of the brand. When you see a BMW police bike in the southeast, Kevin James was the one, who introduce it, and made its presence known. In 1997 the BMW International Rallye at Lake Fontana, was ruthlessly persecuted by the North Carolina state patrol, and local sheriff’s authority. Road blocks set up every 2 miles, trying to entrap, and close the Rallye. Now in 2012, N.C. has BMW R 1200 RTP as their official pursuit vehicle. If it was not for people like Kevin James, and these events, brand awareness may have never happened. Another one of his most recent accomplishments was the development of Moto Mountain. An “Off-road Park” located in the North Georgia Mountains between Jasper, and Fairmont, Ga. He was instrumental in developing the business prospectus, meeting with the county commissioners, achieving approval, and the trail layout and design. The park is very vibrant and growing daily.

A very new and exciting project is in the works at IMS is 944point2 and 3 and 4 as well. As a member of Rally Earth! And participating in a going green society, to re-cycle a previous vehicle and make it better! Is the Thesis of this project. Very similar to the creation of Eleanor’s (The car showcased in gone in 60 seconds) Kevin has taken on the project of creating a better Porsche 944. Front engine, water cooled Porsche’s were extremely frowned upon their introduction. The purest did not want to accept it, or recognize it, in the lineage. Their belief, all Porsche’s are rear engine, air cooled only!

Peter Gregg Porsche / Audi; a new car dealership he worked at during the time of the introduction of the 924 / 928 and later 944. Peter was racing a 911 in the Camel GT series, and at certain NASCAR events, and the 24 hours of Daytona etc. approached the series to allow him to remove the headlights off the top off the fenders, and relocate them under the front bumper, similar to a fog light installation. His bases/ thesis of his argument, and reason: the new cars Porsche is selling, all have a slope nose, and he wants to homologate his car to the new design. Peter had a direct line to Ferdinand Porsche, calls were placed. Hail, the slope nose 930, and twin turbo 935/6’s. Park a slope nose next to a 924 / 944/ 928 and you see the similarity.

Porsche the car company was on a death kneel in the eighties. They faced the oil embargo and rear engine air cooled cars were just not selling. If it was not for the water cooled Porsches during that time line, Porsche, the car company would have tanked. Porsche cars have all gone to water cooled now, and their leading selling cars are the front engine four door versions. The new Panamera is a silhouette of the 911 design. Peter Gregg achieve manufacturer points in NASCAR at certain events, competing in his tiny 3.2 liter under powered 280hp 911, while duking it out on the high banks of Daytona! against 600 hp Superbirds, Torino’s, Monte Carlo’s etc. Porsche has yet to flex its muscle in that series again. With manufacturer points, it is entitle to re-enter that arena. Look for Porsche to go up periscope, and enter the Panamera in that series. Remember you heard it here first! Kevin’s tribute to the 944, and the project will be revealed at a later date. Thank you for reading, and exciting things are always happening at International Motor Sports Inc. stay tuned . . .